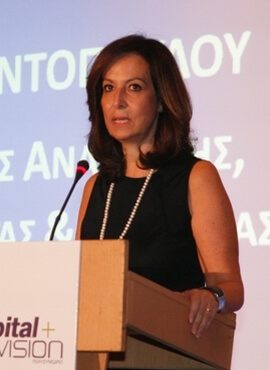 President, "NETWORK" for reform in Greece and Europe

President DIKTYO - NETWORK for REFORM in GREECE and EUROPE

ex Minister of Education and Development of GREECE

Graduate engineer of the Aristotle University of Thessaloniki with postgraduate studies in Regional Development at Panteion University.

She served as President of EOMMEX 1993.

In the elections of 1996 she was elected MP of Kozani and then served as Minister of Development responsible for Privatization.

In September 1999 became European Commissioner for Employment and Social Affairs.

She returned to the Greek Parliament as a State Representative in 2004 and re-elected in the First Athens in 2007 and 2009.

Minister of Development, Competitiveness and Shipping, March 2012 - May 2012.

From 2013 to today she is President of the "NETWORK" for reform in Greece and Europe.