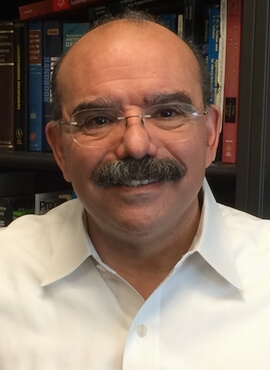 Prof. John L. Volakis was born in Chios, Greece on 13 May 1956. He has 34 years of experience in all aspects of Electromagnetics and sensing. He is the Lois and Roy Chope Chair Professor of Engineering at The Ohio State Univ, and Professor in the Electrical and Computer Engineering Dept. He was previously on the faculty of the University of Michigan-Ann Arbor from 1984 to 2003. He also worked at Rockwell NAAO (now Boeing) on the B1 program (1982-84) and consulted for the Northrop-Grumman B2 program. His research covers wireless communications, wearable textile electronics, antenna and arrays, RF materials and metamaterials, multi-physics engineering, bioelectromagnetics, mm-wave front ends for GB communications, THz, radar scattering, electromagnetic compatibility and interference, propagation, design optimization, and computational methods. He is internationally known for introducing the finite element methods in electromagnetics, novel metamaterial antennas, textile sensors, RF materials for high performance hardware, and for ultra-wideband beamforming arrays. He was listed by ISI among the top 250 highly cited scientists/engineers (2014), and his google h-index=51 with over 12,000 citations. In addition, he has numerous technology transitions to industry. His publications include 400 journal papers, 700 conference papers, and 8 widely used books (Approximate Boundary Conditions in Electromagnetics, 1995; Finite Element Methods for Electromagnetics, 1998; the classic 4th ed. Antenna Engineering Handbook, 2007 and Small Antennas, 2010; Integral Equations for EM, 2011). He has mentored 82 doctoral students/post-docs (with 34 of them having co-authored papers that won awards at international conferences). Among his Ph.D. students, several started new companies or have become leaders in major corporations, and 19 are faculty members at major Universities. His service to Professional Societies include: