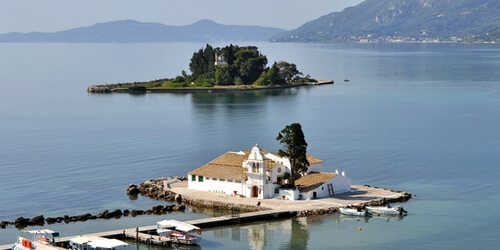 Corfu also known as Kerkyra is one of the most cosmopolitan islands of Greece, the island is located on the northern side of the Ionian Sea. Corfu is a place with long history and rich tradition.

The first governor of modern Greece, Ioannis Kapodistrias, also originated from Corfu. Corfu island has many wonderful sights. Many conquerors arrived on the island through centuries, including British and Italians, leaving an evident mark on the local culture.

Corfu is green and leafy, so much so that it seems as if every inch of the island is covered with trees. Even when your eye becomes accustomed to the landscape, you cannot stop reeling at the sheer number of trees, particularly the olives. There doesn't seem to be any bare land, open spaces or fields. 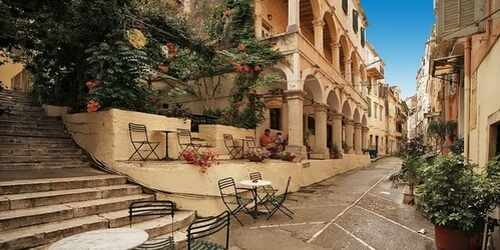 The Old Town, is a labyrinth of narrow streets paved with cobblestones and packed with tourist shops all selling pretty much the same things: wooden toys, soaps, olive-wood carvings and embroidered fabrics.

One of the products on offer is a sickly-sweet liqueur made from kumquats; the little Chinese oranges are grown locally, having been introduced - presumably by the British - from East Asia in the 1860s.

These cobbled streets are known as the kantounia, and some of the older ones follow the gentle, stumble-inducing irregularities of the ground; many are too narrow for cars and lorries. 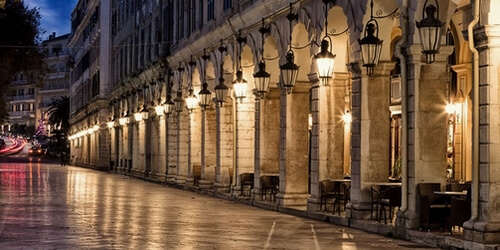 A promenade rises by the seashore towards Garitsa Bay, together with an esplanade known as the Spianadha, between the town and the old Venetian citadel.

On the western side of the Spianadha lies the Liston, an arcade of shops and cafés modeled on the rue de Rivoli in Paris and designed in 1807 by the French engineer Mathieu de Lesseps (whose son built the Suez Canal). 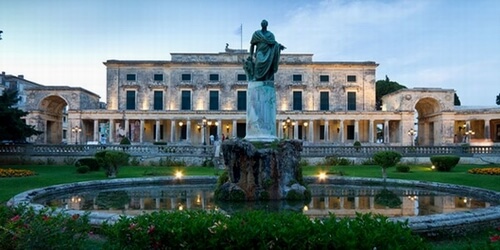 The Museum of Asian Art, where more than 10,000 artifacts, donated by Gregorios Manos in 1927, are housed in a building which originally belonged to the British Protectorate.

It was designed by the British architect Sir George Whitmore in 1818 as the residence of the Lord High Commissioner and was also used as the headquarters of the Order of the Knights of St Michael and St George. 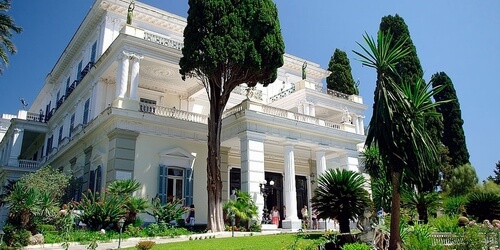 The Achillion Palace is located in the picturesque village of Gastouri. This magnificent Palace was built in 1890 exclusively for Elizabeth (Sissy), the former Empress of Austria. The palace used to serve as the summer retreat of the Empress. Unfortunately, Sissy the Empress passed away in a rather tragic manner when she was brutally assassinated in 1898 in Geneva and the palace was deserted till the year 1907 when it was bought by Kaiser Wilhelm II of Germany.

The palace is located in a place of mesmerizing beauty with Corfu coast down below, which still has the jetty from where the Kaiser would embark on his pleasure cruises.

The Palace is not only renowned for its classical features. The impeccably landscaped palace garden is absolutely top class and makes for a picture perfect setting. 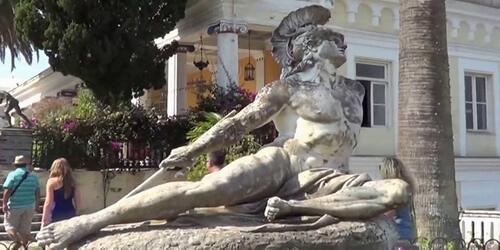 Legend has it that the Empress fell in love with Corfu, so much so that she ultimately decided to build a residence that she could call her own. The palace is located at the spot where the manor of the renowned philosopher Petros Armenis Vrailas stood.

Empress Sissi was also captivated and awestruck by ancient Greek legends and mythology. Her favorite was Achilles on whose honor she dedicated the palace. The Palace garden is replete with rather artistically sculpted statues of the pantheon of Greek Gods and Goddesses that makes for a truly mythical setting.

During the time when the palace was occupied by the Kaiser, he is said to have removed the magnificent statues of Achilles and additionally constructed the House of the Knights with the sole reason of housing his battalion on Corfu. Even the palace garden was re-landscaped according to the whims and fancies of the Kaiser. 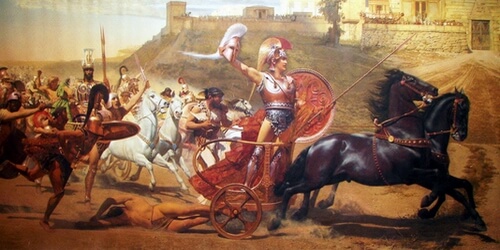 The palace was given the status of a Public building after World War II.

Visitors to the palace can marvel at the exquisite mural positioned right at the reception enclosure which rather artistically portrays Achilles carrying the dead body of Hector.

The popularity of the Achillion Palace also comes from the fact that the famous James Bond movie For Your Eyes Only was shot at this magnificent palace. 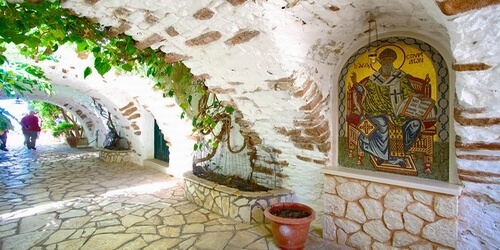 Other notable places are the Old Fortress of Corfu, the Fortress of Saint Mark, the Archaeological Museum of Corfu, the church of Panagia Vlacherna and the Mouse Island (Pontikonisi) near Corfu, The Monastery of Paleokastritsa in Corfu Source and the list goes on.

How many shades of blue are there? All you have to do is list them as you lay back in your lounge chair and observe the waves breaking.

Thirty beaches have been awarded a Blue Flag, adorning the 217 km of Corfu’s coastline with a lush, green background.

Except for the awarded beaches, there are many others just as wonderful. Sidari, Paleokastritsa, Glyfada, Kavos are just a few of them.